Krav Maga is one of the most popular forms of self defense mechanism being used world over. Though Krav Maga was developed for the Israeli Defense Forces and Israeli Security forces as a form of military self-defense, it has become equally popular among the masses for its combat techniques that can be implemented in real time situations.

Krav Maga has gained inspiration from the techniques derived from aikido, boxing, wrestling, judo and karate. The basic concept of Krav Maga was to incorporate the techniques from these genres of fighting styles and utilize them in the military system. With time, slowly and steadily the civilian population started getting oriented to this fast-paced concept of self defense and became popular worldwide as a sporting event.

Krav Maga, developed under the street fighting experiences of the martial artist Imi Lichtendfeld has seen many changes since its inception. The main focus of the technique is as follows:

Though Krav Maga is an innovative form of self-defense, it can still give rise to many injuries due to faulty posture adopted during the strike and or counterstrike. It is absolutely necessary to perform and imbibe the skills for Krav Maga under expert supervision. With its simple yet repetitive movements, the chances of inflammation on joints and muscles increases, hence it becomes all the more important to get yourself assessed by a Physiotherapist before enrolling into the program. The combat skills of Krav Maga are high intensity which can cause increased muscle tightness and or muscle imbalance. We at, Prohealth Asia offer classes to not only improve your self defense techniques but also offer the way to minimize injuries while on your path to self-defense. 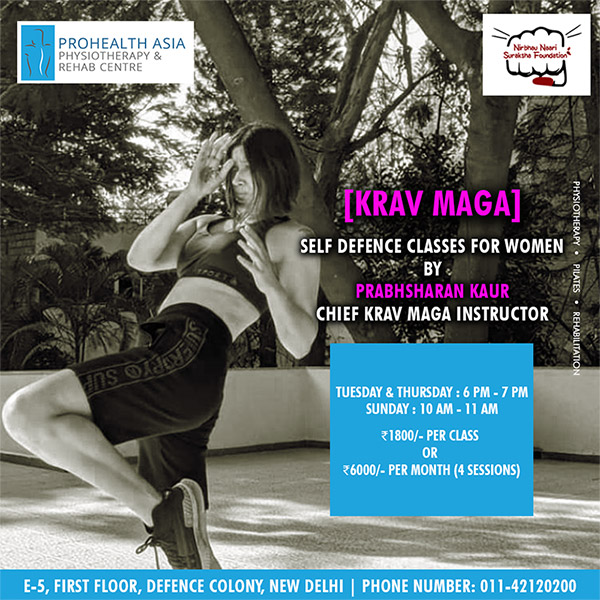 Come to our Physiotherapy clinic in Defence Colony, Delhi for a chat with one of our expert physiotherapist to plan the right Physiotherapy treatment for you to get rid of pain in no time.